First things first – let’s give thanks for the work of the intrepid souls on TREC, who have labored long and hard to learn about the issues facing the church, and to figure out how to address them. I have been plenty critical of TREC’s work in the past, but I do appreciate their work and their love for this church. I even appreciate much of what they have recommended.

The problem is – and this is a common problem in the church – that they are better at diagnosis than at treatment. They are absolutely spot-on with their recognition of some of the problems facing the church. And their prescription that we need to “Follow Jesus, into the neighborhood, traveling lightly” is truly inspiring.

Let’s take a look at the problems TREC is trying to address. Two research reports recently released by TEC’s Research guru Kirk Hadaway highlight the issues: Domestic Fast Facts 2009-2013 and  Episcopal Congregations Overview 2014.  Membership is falling, attendance is falling, the median attendance at an Episcopal congregation is 61. These are not sustainable numbers. At the same time, we are closing many churches and failing to plant new ones. According to data that Kirk Hadaway gave me, in 2012 we had a net loss of 69 congregations; that same year, there were only three new congregations (filing parochial reports) across all of TEC.   And if you look at the Episcopal Congregations Overview for 2014, the problem is thrown into stark relief when you see the racial/ethnic composition of TEC: 87% White non-Hispanic, 6% Black or African American, 3.6% Hispanic/Latino, 1.3% Asian/Pacific Islander, 0.9% Native American, 1.3% Multi-Racial. This in a country where Whites will soon be a minority and where Hispanic/Latinos will soon be more than 30% of the population. We Episcopalians are older than the American population, too. I don’t have to rehearse all this stuff – you can see for yourself, and probably already have.

Given the stunning situation of decline we find ourselves in, I guess our church has two choices: we can Go gentle into that good night (as Dylan Thomas would say), or we can Rage, rage, against the dying of the light. Me, I’m not ready to give up the ghost yet. 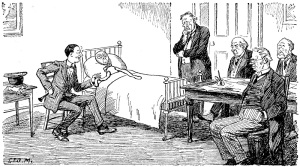 What worries me is TREC’s apparent prognosis. They don’t name it specifically in the report, but many of their recommendations seem to be aimed at providing palliative care for a patient that has entered a long, slow, inevitable decline. What do you do with a church that is dying? You make arrangements for clergy to find other ways to make a living, you think of non-church ways to use the buildings to keep them open a bit longer, you try to find ways to provide pensions for people who can’t actually make a living in the church, you try to get seminaries to educate people for less money with more practical skills they can use elsewhere, you ask dioceses to consolidate, you discourage parishes from spending down their endowments in hopes that some future generation will find more productive uses for the money. And maybe, in addition to all that, you find ways to make governance more efficient.

If we actually wanted to revive the church, we would be looking at ways, not to manage decline, but to spark new life. We would be prioritizing evangelism and planting new congregations of every kind. We would be proposing to create a school for church planters and for bicultural/bilingual missionaries. We would be urging and training bishops and Commissions on Ministry to approve for ordination, not the folks that they would like to see at their bedside when they breathe their last, but the folks that both inspire and alarm them with new, risky ideas for reaching new people. We would be encouraging congregations with buildings not just to provide them for community use (always a good thing), but also to use them to plant congregations that actually do reach new kinds of people in their neighborhoods with the good news of Christ, in culturally relevant ways. We would be looking at our church-wide budget (the lever that moves the church, as my friend Frank Logue says) to strip away deadweight that does not encourage these priorities, and putting our resources behind life-giving ministries instead. We would be saying, yes, there are buildings and congregations in declining areas that have no hope of revival, and we would be making tough decisions and considering how to use those assets (or the money we could get for them) to reach new people. We would develop leaders for and pour money into youth and campus ministries. We would believe that Christ is not through working in our church yet.

By the way, TREC agrees with me, I think. They said very similar things on page 4 of their report (along with a very kind shout-out to the Acts 8 Moment, a grassroots network of which I am a founder and board member). They seem to agree with what I am saying in concept, but in their concrete recommendations they revert to managing decline.

I wish TREC had focused instead on sparking new life. It’s almost Christmas. Let’s not talk about decline and death. Let’s talk about new birth, new life, and how Christ is continually coming into our world.

18 thoughts on “Do Not Go Gentle: The TREC Report, Part One”