Lessons for today are here.

You’ve probably seen the bumper stickers: “Jesus is coming. Look busy.” Or: “In Case of Rapture, Car will be without Driver.” Or my personal favorite: “After the rapture, can I have your car?”

There’s lots of talk out there about the Rapture, the Second Coming of Christ. For instance, there’s the “Left Behind” series – 12 books based on a particular interpretation of Christian end-times prophecies. The series has sold millions of copies, and has recently spawned a high-budget movie starring Nicolas Cage. I will admit that I am not an authority on these books – I got about two chapters into the first one and found it so disturbing I had to stop reading. But from what I gathered, these books begin with the Rapture: people are caught up into heavens to meet returning Jesus – which is one interpretation of the Thessalonians reading this morning. All the good people vanish, leaving piles of clothes and personal effects behind. Planes crash, driverless cars cause chaos, the world is in flames. Only “saved” Christians are taken; sinners and people who are the wrong kind of Christians (such as many Roman Catholics, and I’m sure, many Episcopalians) are Left Behind. 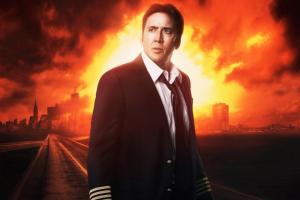 The rest of the series involves the tribulation, as a few people belatedly realize their mistake in not being saved before, and valiantly fight against the anti-Christ and his minions. Eventually, around the tenth book or so, Christ will return to earth and will start an absolute blood-bath of blowing up his enemies. One commentator calls this blood-bath the return of the “Christ-inator” (similar to the Terminator) and wonders how Christ went to heaven and got a complete personality transplant. I mean, is this the same Jesus who said we need to love God and love our neighbors? The Jesus who forgave his enemies from the cross?

But there it is: it’s one interpretation of what Christ’s return will look like, very popular among a certain set of American Christians (not a well-known interpretation outside the US). It is based on a particular interpretation of the end-times that is distinctly modern – it was not even thought up till the 19th century, and it is certainly not traditional Christian theology.

What is so disturbing about it all is the absolute gleefulness that Christians feel as they read about (or watch in movies) people who aren’t Christians – or who are different kind of Christians than they are – meeting death and destruction. And question becomes: would Jesus really do this to people he came to save? 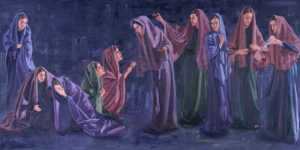 The unfortunate thing is, if you read today’s gospel a certain way, it seems he might. In the parable we read today, ten bridesmaids are waiting for the bridegroom; five are wise and have plenty of oil, but the other five are foolish and, right when the bridegroom arrives, they discover they’ve run out of oil and have to go run off to find some. The bridegroom lets the wise ones in, and locks the door against the foolish ones. And when they come and pitifully start banging on the door, he refuses to let them in – I don’t know you, he says. Devastating.

If you’re of a “Left Behind” frame of mind, this story is really easy to fit into your scenario – the five wise ones have already been saved, the five foolish ones didn’t prepare by repenting and being saved, and oops! They’re left behind. It’s pretty cut and dried, rule-based, theology based on who’s in and who’s out. Problem is, Jesus really didn’t seem to operate like that. Jesus included everyone, especially the foolish ones, the ones no one expected God to like, the prostitutes and tax collectors. No one was left behind or left out by Jesus. Furthermore, Jesus says over and over that we are supposed to share what we have with others, not hoard it as these “wise” bridesmaids hoard their oil, refusing to share because there won’t be enough left for themselves. How is this a Christian way to act?

Or (Matthew 7:7ff) “Ask, and it will be given you; seek, and you will find; knock, and the door will be opened for you, unless of course you’re late and the bridegroom answers, in which case, you might as well forget it.”

And so on. The point is, this is a very curious parable – it the light of the rest of the gospel, it makes no sense. This bridegroom who won’t let in a few foolish bridesmaids – is this the same person as the Jesus who said he was the Good Shepherd, who would leave 99 well-behaved sheep just to chase after one lost sheep? This bridegroom seems never to have heard of that Jesus. This story seems to be just about punishment for small missteps – like in “Left Behind.” Punishment that glories in the misfortunes of the ones who are left out of the party.

But I don’t think Jesus was the “Christ-inator” – the one who comes to punish his enemies. I think Christ was the Savior – the one who came not to condemn, but save world. (It says so in the first chapter of the Gospel of John). So let’s look a little more closely at the parable.

All ten bridesmaids were invited to the feast; all ten accepted the invitation. But the bridegroom was late in arriving, and all ten fell asleep. At this point, we need to note that Matthew’s gospel was written around 80 AD – 50 years after Jesus died – at a time when Christians were very concerned that the Second Coming of Christ hadn’t happened yet. The bridegroom being delayed would be a matter of high anxiety for them, especially in light of what was going on in their world. The Temple in Jerusalem had been destroyed, both Jews and Christians were driven into exile, both were being persecuted, and they were both trying to figure out if they were one religion or two, and were busy separating themselves from each other and excluding each other. These Christians of Matthew’s time, surrounded by all this anxiety, would have to be wondering how to act until Christ appears.

Back to the parable: then someone catches sight of the bridegroom, all ten bridesmaids wake up, but five of them get all anxious about a trivial detail – their lamps – and run off before he arrives, while he is only steps away. In essence, the bridegroom in in sight right there, but they decide that there is something more important than him to concentrate on. That’s why they are shut out – not by his choice, but by theirs – because when the bridegroom arrives, you need to be ready to greet him with joy. The arrival of the bridegroom – Jesus – needs to be the most important thing there is. Nothing else takes precedence.

Which leads me to ask: how are we preparing for the bridegroom’s coming? If the people of Matthew’s time were concerned because Jesus had been gone for 50 years, well, for us, he’s been gone for 2,000 years – and it sure is easy to get distracted and begin to believe that trivial details of our lives are more important than he is.

So how do we prepare for the fact that Christ is real, and that someday we will meet him? I’m not talking about something as simple as whether we’ve been saved, whether we consider ourselves Christian, whether we think there is such a thing as the Rapture, whether in case of rapture our car will be driverless! I want to know, is our spiritual health, is our love of God and our neighbor the most important thing in our lives? Are our lamps lit, are our eyes open to see Christ in action and join him wherever he is?

If not, what has become more important? What distracts us from God? What takes our attention off the things that really matter and redirects it to things that don’t? Like foolish bridesmaids who run off to take care of one last detail when the bridegroom is in sight and the wedding is about to begin?

This world has many distractions – busy schedules and worries about money, and family quarrels, and work that absorbs all our time and energy, and politics and entertainment and the internet – and it’s easy to neglect our spiritual lives. We have so many choices that it’s hard to put them in order. Should I pray, or do Facebook? Should I go to church, or clean my house? Should I take my kids to Sunday school, or should they go to soccer? Should I give money for God’s mission, or should I let someone else take care of it? Should I do an act of service for someone, or should I go to work?

We have so many priorities in our lives, yet all of them, potentially, are distractions from the bridegroom. Like the five foolish bridesmaids, we are in danger of spending way more time on anxiety over details than on concentrating on things of ultimate importance. While the things of ultimate importance are neglected, like daily prayer, like worship, like asking God for guidance, like doing intentional acts of service. Like opening our eyes to the God of the universe who loves us and wants to remake us into the glorious people we were created to be.

So many of us have settled for way too little in life, when God wants to give us everything. The cares of this world have deceived us and beckoned us. So we pour ourselves into them, we stress ourselves out, we forget to nourish ourselves spiritually, we don’t keep our lamps lit, we close our eyes and miss the presence of Christ, the bridegroom, right here. We forget who we are.

Who we are is children of God, made in the image of God, created to be in communion with God through Christ. And Christ is coming. Christ is always coming.

Christ is coming to this church, in this holy communion. He will be here any minute now. Indeed, he is already here, where two or three are gathered.

To wait with longing for the thing that is most important.

The bridegroom is coming, and indeed, he is almost here. Alleluia.